Have you seen this Historic Renovation Project?

Loveless Porter Architects offices were at one time two Center Street buildings that were on the City of Manassas Historic Landmarks list: Austin House and Methodist-Episcopal Church, South, both built in the early 1900s. This project was particularly exciting, as the former church (and also one-time Bellydance studio), has now will come to life as our office space, showcasing our design sensibilities within the limits of the Historic Nature of the structure and Architectural Review Board.

It was important that the project respected the existing massing, or general shape, of the building. Our plan added a circle window on the Center St. elevation that relates to the structure across the street, and we designed the exterior finishes so that the rear addition still looks like an addition from an earlier time, as opposed to trying to make it blend in. Other features include a brick water table along the base of the main building, and brick around the entry feature to create a more formal entry point. We replaced shingles with a standing seam roof, which the building likely had originally. We also included the use of a wider trim around the new windows and doors, with the new plain-sawn, hardie-board siding that was a common wood application in its time.

Some modern amenities we added are LED exterior lights to give the facade more interest and replaced the old wood windows and doors with aluminum-wrapped material, while still maintaining the aesthetics of the original look. Elements such as color and exterior material choices add additional visual interest. 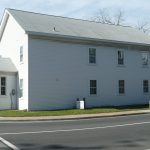 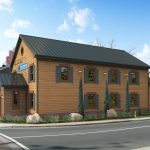 Take our Virtual tour here and see how it turned out: